The Curious Case of the Sidewalk Shredder 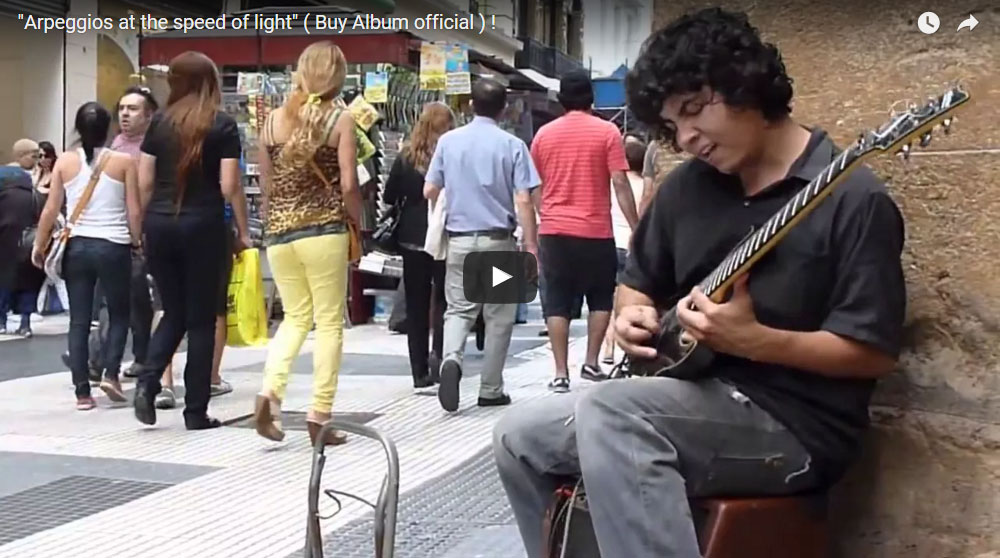 So I pick up my guitar to do my daily workout routine and I’m first distracted by my Facebook (typical) news feed when I see above video with the tagline..

Further proof no one cares about “good” anymore…lil bastard slays shit for 4 mins or so…no crowd gathers, no one bats an eye or slows their roll. Guess he needs a better marketing team or agent to let people know he’s good. Sometimes… I’m just sad.

The video is followed by comments such as “He should be play Madison Square Garden with that kind talent!”

Facebook and YouTube is filled with these kinds of videos followed by waves of disheartened musicians who think “why bother? I’ll never be this good and look where he’s at!”

I fall victim to this very same situation. I’ll never be good as this kid! Look at that shit. That’s 4 minutes of pure precision shredding..And the guy is right. No one is batting an eye! Obviously his formula is correct:

The more skill you have + playing to a perceived large audience = ZERO RESULTS.

It’s then that most people would just hang it up and toss their prized Gibson Les Paul right into the bonfire.

But then I noticed the video has almost 8 million views and 159,000 shares. That’s a considerably larger audience than the 40 people strolling down the sidewalk. And if you’re going to make a case of it, zero number of people are there to watch a concert. They’re shopping for Sketchers. And know, probably most of them don’t own a single Yngwie Malmsteen album. There’s a reason bands don’t set up on street corners and make it big. Unless you’re a giant artist that everyone knows or extremely hilarious or outrageous, it’s just plain annoying.

My point? Skill DOES make a difference. Playing on a street corner may not have done this kid any good. I highly doubt the president of Sony Records was taking his kids to ice cream when he hears the notes of some sweet, distant shredding. No, the recording of this performance and throwing up on YouTube DID make a difference. In fact, This kid has a bunch more videos, some with a few hundred thousand views. Now, with that kind of exposure, this kid COULD parlay that into some type of career, given that is his goal. Otherwise his fame ends here and he’s swollowed up by the next 8-year old Japanese guitar virtuoso.

But now you’re saying “Well Henry.. Then you DO have to be this good to make it! I hate myself! And you for telling me this!”

Yes, you do have to be good. In fact, you most likely have to be as good or better than most of your competition, if the music business is what you’re aiming for. But good doesn’t mean you have to play ALL of the notes. Good can mean a lot of things. I would love to be able to play like this guy. When I was a kid, I loved all of the shredders and shredding was the single most important goal. Then the 90’s happened (I’m older than you, ok? Deal with it.) and shredding became the red-headed stepchild of the guitar world. (Sorry to all red-headed stepchildren.) It was then that my playing took a hard left turn. Gone were the arpeggios, multi-fingered tapping and cascading legatos. It became more about noise, aggression, dissonance and vibe. Now that it a completely different skill set and you might be thinking, “Well that doesn’t take talent!” Well there is a wealth of guitar players who came out of that era who defined that sound. And I bet most of them can’t play like that kid above.

So what is my big point? Don’t stop playing. This is not a competition unless you enter one. Play for yourself and push your own personal boundaries. That’s exactly what this kid did and he has 7 million views to back it up. But there’s another guy who couldn’t shred like this nor did he want to. He and his band has sold 112,000,000 albums worldwide. His name is Kurt Cobain.